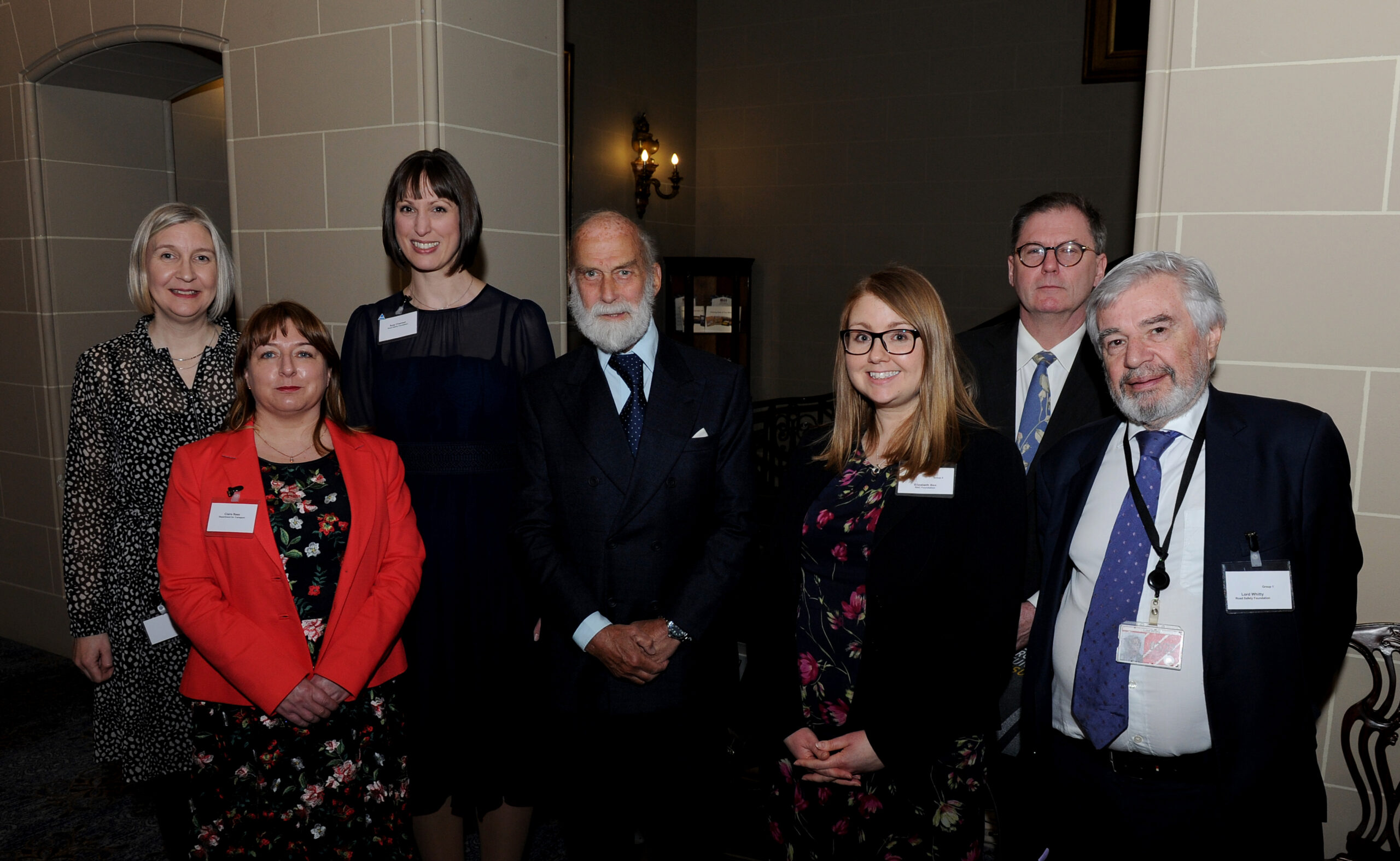 The RAC Foundation and the Road Safety Foundation have hosted a reception to celebrate winning, along with the Department for Transport, a Prince Michael International Road Safety Award for their “fine example of collaboration” and the “outstanding achievement” of the Safer Roads Fund*.

HRH Prince Michael of Kent presented the award. The RAC Foundation’s Steve Gooding, Road Safety Foundation Chair Lord Whitty and Emma Ward, Director General of the Department of Transport welcomed guests from local authorities and National Highways whose roads** were identified for safety improvements through investment from the fund.

In his speech, Prince Michael said:

“We all understand just how important it is to ensure high standard roads for the benefit of the community and the economy to provide roads which are of the highest safety standards is equally important but to do so is expensive. So to have a well-funded, scientifically-based process for determining priorities is essential.”

“We were delighted to commission and financially support the Road Safety Foundation to embark on the Safer Roads Pathfinder Project, which quickly made the case for a larger scale Safer Roads Fund. The pathfinder and wider Department for Transport project together represent a significant step change in practice in supporting local authorities to apply a new proactive safe systems approach to risk management on exceptionally high-risk routes. The tools and guidance developed by this project will undoubtedly benefit countries beyond the UK. We are delighted that the scope and impact of this work has been recognised with this award.”

“I was honoured that our Safer Roads Fund won a Prince Michael International Road Safety Award at yesterday evening’s event. Despite already having some of the safest roads in the world, a light was shone on all the work being done to make them safer still.

“This fund alone is expected to save nearly 1500 lives over the next twenty years, and we will continue our efforts to save countless more.”

“We look forward to building on the success of the Safer Roads Fund in our work with local authorities, continuing to help deliver the best possible outcomes in making their roads safer.”

A selection of photos from the event are available here:

About the Safer Roads Fund

*The £100 million Safer Roads Fund was established following a successful pathfinder programme delivered by Road Safety Foundation and commissioned and financially supported by the RAC Foundation and the Department for Transport. The Safer Roads Fund programme focused on treating the 50 highest risk local A road sections** in England with remedial road safety engineering interventions.  Together the Safer Roads Fund schemes are set to prevent around 1,450 fatal and serious injuries over the next 20 years.  The value of prevention for the schemes is £550 million compared with the whole life cost of treatments of £125 million.  The Benefit to Cost ratio for this portfolio of roads is estimated to be 4.4, meaning that for every £1 invested, £4.40 is returned in terms of societal benefit. This demonstrates how road safety interventions can compete favourably with other major transport projects.

The awards recognise achievements and innovations which will improve road safety. Established by HRH Prince Michael of Kent in 1987 and organised by RoadSafe, each year the most outstanding examples of international road safety initiatives are given public recognition through the scheme.  www.roadsafetyawards.com

Reactions to this Award

In a letter to Dr Suzy Charman, Executive Director of the Road Safety Foundation, His Royal Highness Prince Michael of Kent said:

“I was delighted when the Westminster Government announced the Safer Roads Fund. The importance of sound investment at local level will provide many long-overdue improvements, not just in the 50 most dangerous stretches of ‘A’ roads in England, but elsewhere too. The innovative approach which the fund has triggered by bringing new methodologies to so many local authorities is indeed a step-change in practice and a huge stimulus to deploying a Safe Systems approaches by many roads authorities.”

“Our Safer Roads Fund has been recognised for its life saving work. It was designed to prevent thousands of tragedies on our roads, and the Department will continue to work tirelessly on this priority as we move forward.”

“The DfT’s investment in the Safer Roads Fund is recognised with this award and we hope that the fund will be replicated both here in UK and overseas.  We share this award with the RAC Foundation whose initial support allowed us to undertake the pathfinder project that was a catalyst to the Safer Roads Fund, and of course we also share the award with our local authority partners who worked hard to design and implement their schemes.”

The Road Safety Foundation is a UK charity, founded in 1986, that aims to help reduce road trauma through employing the Safe System philosophy by:

Recently, the charity has:

For more information and our full library visit roadsafetyfoundation.org

In 2020, the Foundation published more than 20 major pieces of research and analytical work, conducted both in-house and by external experts, and responded to several consultations.

For more details of the work carried out by the RAC Foundation please visit www.racfoundation.org.

Two reports of the results of the Safer Roads Fund are available here: https://roadsafetyfoundation.org/project/safer-roads-fund/.