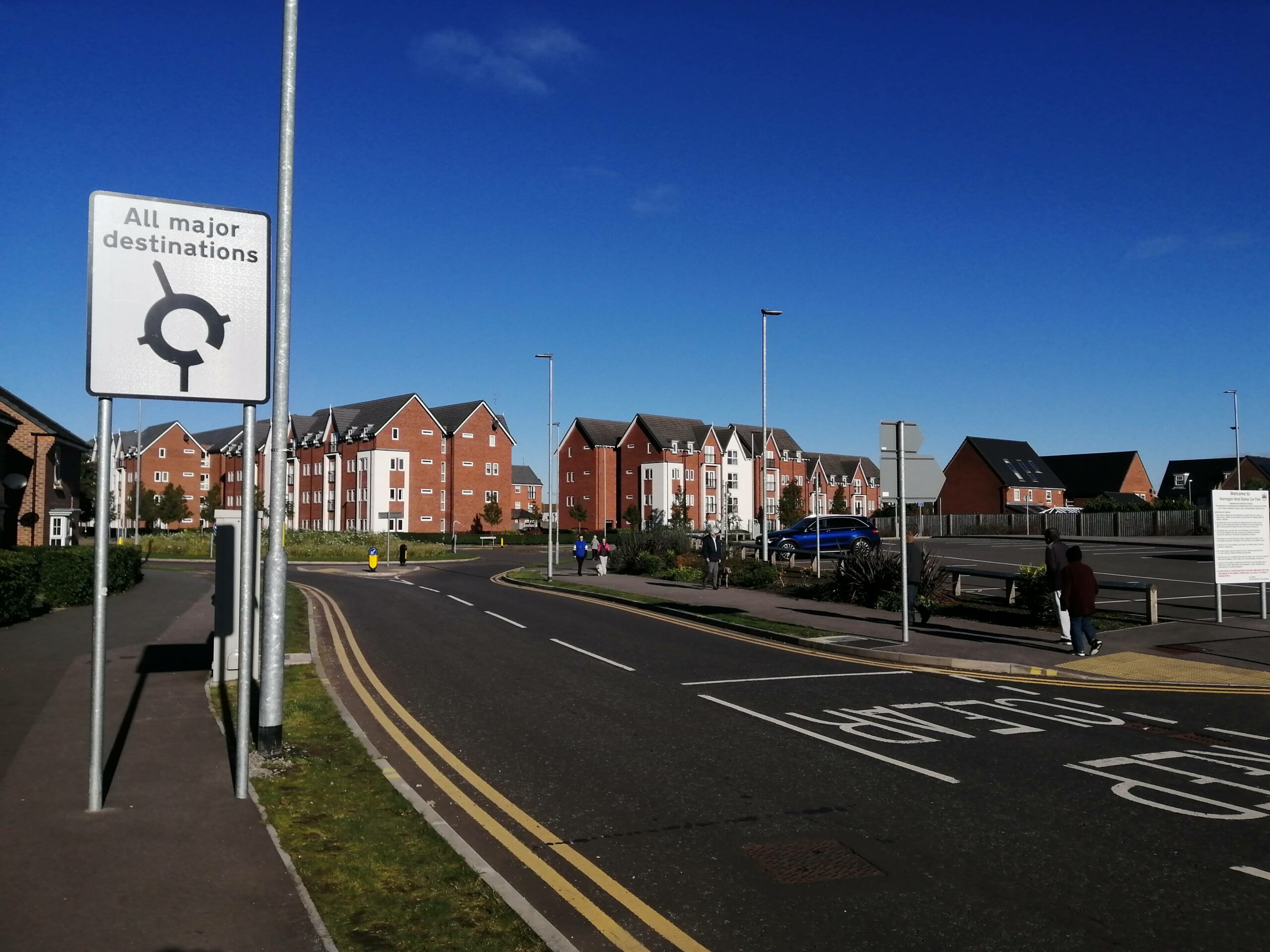 ‘Building Car Dependency’, a report released today from Transport for New Homes, has concluded from its field visits to 20 new housing developments across England that a typical greenfield development is designed in every way around the car – with as many as two to three car parking spaces per home.

Rather than the walkable, green, and sustainable places that both the Government and developers envisage for future living, the group observed places where residents had to drive for nearly every journey. Transport for New Homes – on whose steering group the RAC Foundation sits – has created a large photographic evidence-base from visits to present their observations and many of these are in their new report.

The research follows the Transport for New Homes 2018 flagship report on visits to housing developments. Returning to these sites three years later, the group have revealed that new greenfield housing has become even more car-based than before and that the trend had extended to surrounding areas, with out-of-town retail, leisure, food outlets and employment orientated around new road systems. They found that we are building ‘car-park to car-park’ with the risk of creating a sedentary lifestyle and isolation for new residents, as well as limited choices for people who don’t drive.

Despite plans for vibrant communities with local shops, leisure facilities and community services, the visions of developers have not materialised. Equally, the excellent public transport promised was often not in place and in some cases had been reduced. In practice greenfield estates planned as ‘walkable vibrant communities’ were dominated by parking, driveways and roads with easy access to bypasses and major roads.

In stark contrast, brownfield developments in cities tended to be less car-based, allowing better access to local amenities by foot, cycle and public transport. Two greenfield developments – Derwenthorpe (York) and Poundbury (Dorset) – were however less car-dependent. This was because they had been designed around walkability and the needs of a local community from start to finish, without compromise. They were also well-positioned to allow residents to easily walk and cycle along overlooked streets to shops and services in their nearby town centres.

The key recommendations in the Transport for New Homes’ report include:

Steve Gooding, director of the RAC Foundation and a chair of the steering group for Transport for New Homes said:

“The phrase ‘car dependency’ implies that people are addicted to their vehicles when generally they are making rational travel choices in the face of the options available to them.

“Residents of new housing developments make their transport decisions based on a mix of what they see is available, what’s convenient, what’s reliable, and what’s affordable.

“If developers, planners and architects continue to push new homes into locations that are poorly connected to the services we all need by any means other than the private car, but don’t even recognise that fact, then we’re in the worst of all worlds because car-dependent residents will end up blocking both the roadway and the footway with their vehicles. What’s needed is some joined-up thinking that puts accessibility up front, rather than languishing as an afterthought in the process.”

“We cannot go on as we have been, building many hundreds of thousands of new homes in places which are not only impossible to serve with sustainable transport, but actually promote more and more travel by car. At a time of climate emergency and with a need to cut congestion on our roads, this is not the way we should be building for the future. We have to draw the line and do things differently.

“Transport and planning shape the way we live. Despite our planners hoping for ‘vibrant places’ where people have many opportunities to interact in real life, the reality seems very different. Small shops, cafes and businesses built for local living are just not there in most new greenfield estates. Local parks, community halls, playing fields and other amenities that would take people away from looking at their screens and encourage them to get out and walk or cycle, appear often not to have materialised. Good public transport often remains aspirational with cuts to services looming. For people who cannot afford a car or cannot drive, they are essentially stuck. This cannot be a healthy vision for how people will live in the future.”

“We found that new housing estates do not live up to government aspirations of homes built around walking, cycling and public transport. With rare exceptions, we discovered that newly built homes are creating thousands of car-dependent households, with poor use of land and tiny gardens to accommodate two or three parking spaces per dwelling.

“Proposals for housing as part of the Levelling Up White Paper will produce more of the same without a dramatic change in approach to planning. Housing must be mixed with, or built close to, amenities and jobs to make active travel a reality for short trips, and good quality public transport provided as soon as the first residents move in.”

Cranbrook is a new town with up to 2,900 homes and potential for expansion to 6,500. Like much of the greenfield housing we saw, walkability was part of the master-planning stage but this has not come to fruition. Whilst there was an independent cafe established and a small parade of shops, at the time of our visit in April 2021 Cranbrook was still waiting for a promised High Street, a children’s centre and community facilities. Residents therefore have no other option than to use a car to access many amenities. Few residents were seen during our visit, which certainly doesn’t create the impression that it is a vibrant, sociable, walking community. A new railway station now serves Cranbrook, following many years of perseverance from residents and local campaigners. It is approximately 280 metres to the nearest house, approximately 410 metres to the walking route (leisure trail), and approximately 560 metres via a lit, safe accessible route from housing and there isn’t a bus to the main development, so residents have to walk for a long time to access it or use a car.

Derwenthorpe is a small development of 481 homes on the outskirts of York, about 2 miles from the city centre. The development, built by the Joseph Rowntree Association, is a good example of a new housing development that has been successfully planned and built around sustainable transport – rather than the car. During our visit in August 2021, we found it has attractive public transport from the city centre, and safe walking and cycling routes to amenities like shops and cafes. There were also ample green spaces for residents within the development, and different sized homes to cater for a range of demographics – not just families. Unlike many other developments we saw, the car parking spaces here were limited and integrated. Derwenthorpe felt like a friendly place with a real community.

Steve Chambers, Sustainable Transport Campaigner, Transport for New Homes: [email protected], 07973 978096 (use 07394 05119 for FaceTime). Polite N.B. – Steve is not available Tuesday 8 February so will be unable to do interviews or take calls that day. If you need an alternative TfNH spokesperson, please contact Laura Potter Communications Coordinator above.