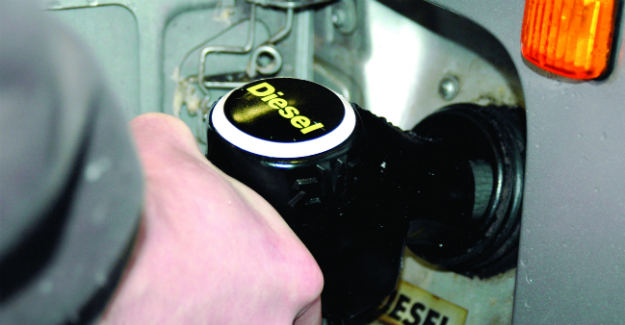 The price gap between a litre of diesel and petrol has hit a new high with diesel now almost 25p more expensive.

According to the latest government data, diesel has an average UK price of 188.9p per litre, 24.5p per lire more expensive than petrol which stands at 164.4p.

This is the highest difference between the two fuels to be found in records dating to June 2003.

Diesel is typically anywhere up to 10p per litre more than petrol but in recent months the gap has expanded rapidly.

“The situation for diesel drivers is grim and unlikely to improve in the weeks ahead. In fact, it could deteriorate.

“Already, drivers of average-sized diesel cars are paying around £105 every time they fill up, about £14 more than those people with similar-sized petrol cars at the neighbouring pump.

“The war in Ukraine has had a big effect on the supply of diesel with problems compounded over winter because, in many countries, diesel is also used for heating and power generation, pushing up demand.

“Things could get worse in the New Year when an EU embargo on diesel starts to bite and limited stock will have to be purchased from much farther afield.

“It is not just private motorists who rely on diesel, so does the economy. The fuel is the lifeblood of business and logistics. The UK’s 4.5 million-strong fleet of vans and half a million HGVs almost exclusively run on diesel. Of course, if companies’ costs rise these will inevitably be passed on to us as consumers, whether we are drivers or not.

“A big unknown is what will happen to the price of oil. Having spiked after the Russian invasion of Ukraine Brent Crude has settled back to around $95 per barrel, a level it has been at since the end of the summer.”

“On a like for like basis diesel cars have always tended to do more miles per gallon than a petrol equivalent but the gap has been closing in recent years and last year the average diesel car sold in the UK only had a 2% better consumption rating than the average petrol car sold.

“Over the past few years sentiment has turned swiftly against diesels and this is reflected in new car sales figures. So far this year, for every eight new petrol cars sold only one diesel has left the showroom. The current price differential between the two fuels is likely to erode the popularity – and economic viability – of diesels further still.

“Ultimately, though, one of the biggest factors of how practical and cost-effective a car is comes down to the driver. If you go easy on the right foot then you will use less fuel, no matter what sort it is.”

The Office for Budget Responsibility (OBR) said on Thursday that a “planned 23% increase” in fuel duty in March 2023 will add around 12p per litre to pump prices.

The figure is based on a combination of the scheduled end of the 5p cut in duty, and the long-standing policy of duty rising in line with the RPI rate of inflation.

But chancellors have repeatedly frozen duty, and the Treasury insisted a final decision on the rate would not be taken until the next budget in the spring.