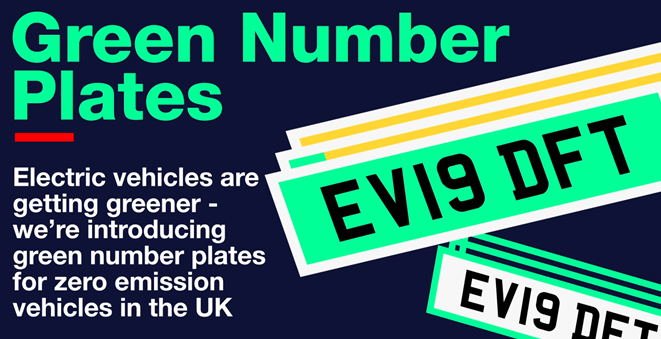 Electric cars could soon be advertising their eco-friendly credentials

Ministers are proposing that the cleanest cars could be fitted with green number plates so their environmental benefits are obvious to everyone.

The Department for Transport (DfT) is consulting on whether such a move would encourage more people to buy electric and other ultr-low or zero emission vehicles.

The green number plates could also be a visual tool to help local authorities make sure that only the cleanest vehicles benefit from reduced or free parking, or access to bus lanes.

According to the DfT such a scheme has been trialled in Ontario with “drivers of electric vehicles given access to toll lanes and high occupancy vehicle lanes. Ontario saw an increase in electric vehicle registrations.”

“We’ve long thought that drivers opting for ultra-clean technology still want the body shapes they’re used to – the top selling Mitsubishi Outlander plug-in hybrid looks just the same as its conventionally fuelled stablemate – but they might be attracted to a green licence plate as a badge of honour, particularly if it confers practical advantages like free parking.”

RAC Foundation analysis shows that at the end of June the Mitsubishi Outlander was the most common plug-in vehicle on UK roads followed by the Nissan Leaf.