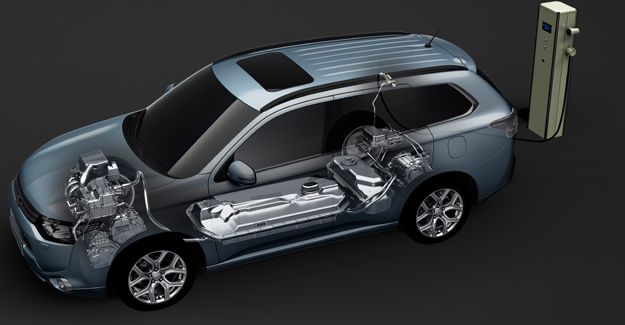 The Mitsubishi Outlander Plug-in Hybrid is now the most common ultra-green car on the road in the UK, knocking the Nissan Leaf off the top spot.

By comparison there were 8,274 pure battery-powered Nissan Leafs, a 21% increase on the 6,838 figure three months earlier.

Third in the list of licensed vehicles that qualify for the government’s plug-in car and van grants is the BMW i3 (2,186, up 43%). The figures are revealed in analysis of DVLA data by the RAC Foundation.

To put these numbers in perspective, in the UK there are 30.7m cars and 3.6m vans. Therefore those vehicles licensed and eligible for the plug-in car and van grants make up 0.09% of the total: 1 in every 1,160.

Note: As of today there are 35 models eligible for the plug-in car and van schemes. The full list is in notes to editors. Some of the vehicles above might have been bought without the grant. Others might be licensed to manufacturers and dealers rather than customers.

“This weekend Formula E electric racing comes to London with the express aim of promoting sustainable clean vehicles. From the latest figures it looks like the organisers might be pushing at a door that is just starting to open.

“Over the last 12 months the number of ultra-green cars and vans on our roads is up by 240% with the Mitsubishi Outlander making the running which suggests that if the industry can offer the style of vehicles motorists want at a competitive price they will vote with their wallets.

“For the time being that is still dependent on a government grant. The challenge for manufacturers will be to offer economically attractive options when the grants get reined in.”

This is the full list of vehicles currently available under the government’s plug-in car and van grant schemes and how many were licensed as of the end of Q1 2015 (with Q4 2014 as a comparison).