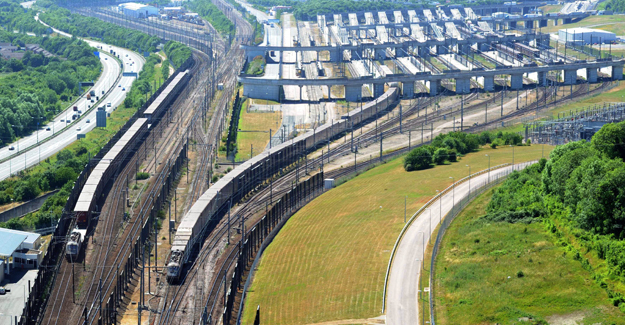 The number of lorries leaving the UK by crossing the Channel has reached an all-time high.

The record volumes are putting more strain on roads in the South East of England and increasing the likelihood of congestion when there is disruption to ferry and Channel Tunnel services.

RAC Foundation analysis of official figures shows that in 2014, 1.98 million goods vehicles crossed the Dover Strait heading for the continent. This was a 7% rise on the pre-recession peak of 1.85 million trucks.

Of the 1.98 million trucks leaving the country via the South East last year the bulk were foreign registered with only 257,000 (13%) registered here in the UK.

The most recent government figures show that when outgoing lorry traffic from all UK ports is taken into account, Polish registered trucks are most common (21% of all outgoing road goods vehicles). They are followed by UK vehicles (13%), then those from the Netherlands (9%), Romania (9%), Germany (6%), Spain (5%), France (5%), Hungary (4%) and the Czech Republic (4%).

The figures illustrate why each time there is disruption to Channel crossings the knock-on effect on hauliers, the people of Kent and the European economy is so large.

“Whenever the ferry and Tunnel services are interrupted the impact is very quickly and keenly felt. And the figures suggest that when the problems occur the impact is only going to get worse.

“The recent focus has been on the migrant crisis, but to those caught up in the chaos on this side of the Channel it doesn’t matter whether the cause is illegal immigration, industrial action, technical difficulties or bad weather: the mayhem is the same.

“Given that so many of the hauliers crossing the Channel are foreign, the surprise of recent events is that more national governments weren’t getting on the phone to the Elysee Palace demanding action.

“With the situation in Calais apparently quieter than in recent months now is the time to come up with a long-term solution for coping with the disruption and protecting the economic development of the South East.”

The Department for Transport lorry traffic figures can be found here: