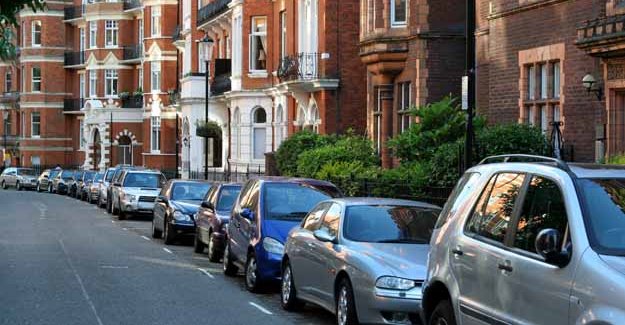 The rise in the number of vehicles and the shortage of parking spaces means millions of front gardens have been paved over to make room for cars.

Figures analysed by the RAC Foundation show around 80% of Britain’s 26 million dwellings were built with a front plot.

Almost a third of these plots have been turned into hardstanding. This means seven million front gardens now contain concrete and cars rather than flowers and grass, a total area roughly equivalent to 100 Hyde Parks or 72 Olympic Parks.

The move to find extra parking space has resulted from the huge rise in car ownership. In 1950, there were two million cars. In 2011, there were 28.5 million.

Based on current rates of ownership, the rise in population alone is set to increase this figure to around 32 million cars in the next two decades.

Not only are there more cars in than ever before, they are getting bigger. The Ford Escort of 1968 was five feet wide. Today’s Ford Focus is six feet wide.

Even where properties have garages they are increasingly being used for storage of things other than vehicles or converted into extra accommodation. A third less cars are put away in a garage overnight than a decade ago.

The figures are amongst those contained in Spaced Out: Perspectives on parking policywritten by John Bates and David Leibling which is published today by the RAC Foundation.

The report is an in-depth look at parking patterns and provision across Britain. It also reveals that:

“Car ownership is set to keep on rising, but where are these vehicles going to go? Unless we want to see more streets clogged up and front gardens disappear then councils need to address the matter. Ministers decision last year to remove the cap on parking spaces at new developments will help.

“Even so we fear councils regard parking provision as an afterthought. Unlike their legal obligation to keep traffic moving there is no law that makes them provide adequate space for stationary cars, though we would regard the two topics as inextricably linked.

“On the face of it parking is an inconsequential act. But it is a hugely emotive topic and providing adequate parking in the right place at the right price is a big challenge for planning authorities.

“Clearly appropriate parking provision by local authorities has to be paid for and if charges are not levied on drivers then council tax payers will have to foot the bill. However the suspicion amongst many that parking charges are general revenue raisers will not be dispelled by the half a billion pound surplus councils in England make each year.”

The report can be downloaded from the RAC Foundation website – www.racfoundation.org – on the day of publication or by following this link:

Only a fifth (19%) of Great Britain’s 28 million cars are put away in a garage each night, while half (53%) of all cars are left on the drive and a quarter (25%) are parked on the street. A minority (3%) are left elsewhere. This is despite ten million households (39% of the 26 million total) have access to a garage

In January 2011 the Housing Minister said:

“National planning policy requires local authorities to set limits for off street parking in residential development. However, evidence suggests that forcing local authorities to adopt parking limits has not led to housing developments which meet the pattern of car ownership in many communities. In new developments these restrictions can lead to significant levels of on-street parking causing congestion and danger to pedestrians.

“I have today removed the requirement for local authorities to set maximum parking limits for residential development in their area, and instead have given them the freedom to decide what level of parking is right based on the needs of their local community.”