Towards an accident investigation branch for roads15 Dec 2017

Bringing roads in line with rail, maritime and aviation sectors

A fresh approach to crash investigation is needed to help bring down death and injury on Britain’s roads.

Currently the police analyse what has happened after an accident with the aim of making a case against anyone deemed legally responsible.

However, in a new research paper the RAC Foundation director Steve Gooding argues that a tandem, no-blame system of investigation needs to be employed to learn lessons which could help reduce casualty numbers in the future.

With the number of fatalities hovering around the 1,750 mark since 2010 he calls for an investigatory approach similar to that already seen in the marine, aviation and rail sectors.

As a starting point Steve Gooding suggests three ways that pilot schemes could be established. He says:

“The creation of a dedicated analytical unit within the Department for Transport (DfT) should be relatively quick and easy to set up, and whilst not being independent nor having the resource to conduct individual investigations could still compile, collate and analyse the huge amount of information already collected.

“If DfT provided some modest seedcorn funding it would be possible to envisage a local or regional pilot involving one or more highway authorities and their associated police constabularies acting together on a voluntary basis. Not a model that would reveal the bigger, national picture, but still able to work through how to manage the tangle of civil and criminal liabilities.

“And then there’s the option of Highways England establishing a unit, directly funded but operating at arm’s length, to focus on the strategic road network. Highways England’s network is not the riskiest in road safety terms, but when things do go wrong both the safety and the economic impacts can be severe – high-speed crashes involving the heaviest vehicles often with damage to carriageways and hours of frustrating tailbacks.

“There comes a time in any long-running debate when an idea either runs out of steam or finally begins to gain traction. We believe that moment is near on the argument for developing a better way to investigate the causes of road crashes, and so we add the Foundation’s voice to those of the Parliamentary Advisory Council on Transport Safety and other safety organisations, and to Sir Peter Bottomley’s, for this fresh ‘do-something’ option – an idea whose time has surely come.” 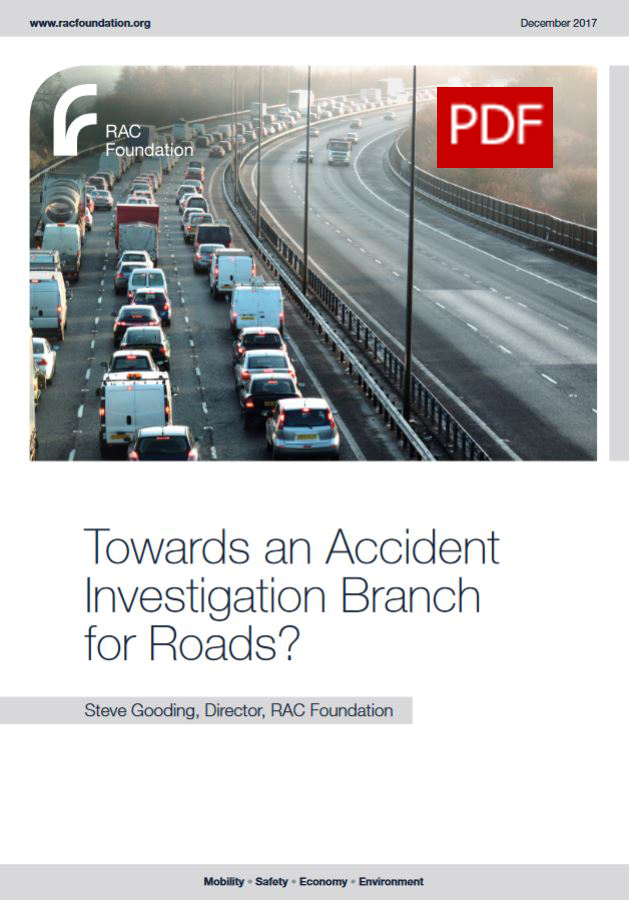 Towards an Accident Investigation Branch for Roads Steve Gooding December 2017